The race for your groceries: Is this the end of the weekly shop? 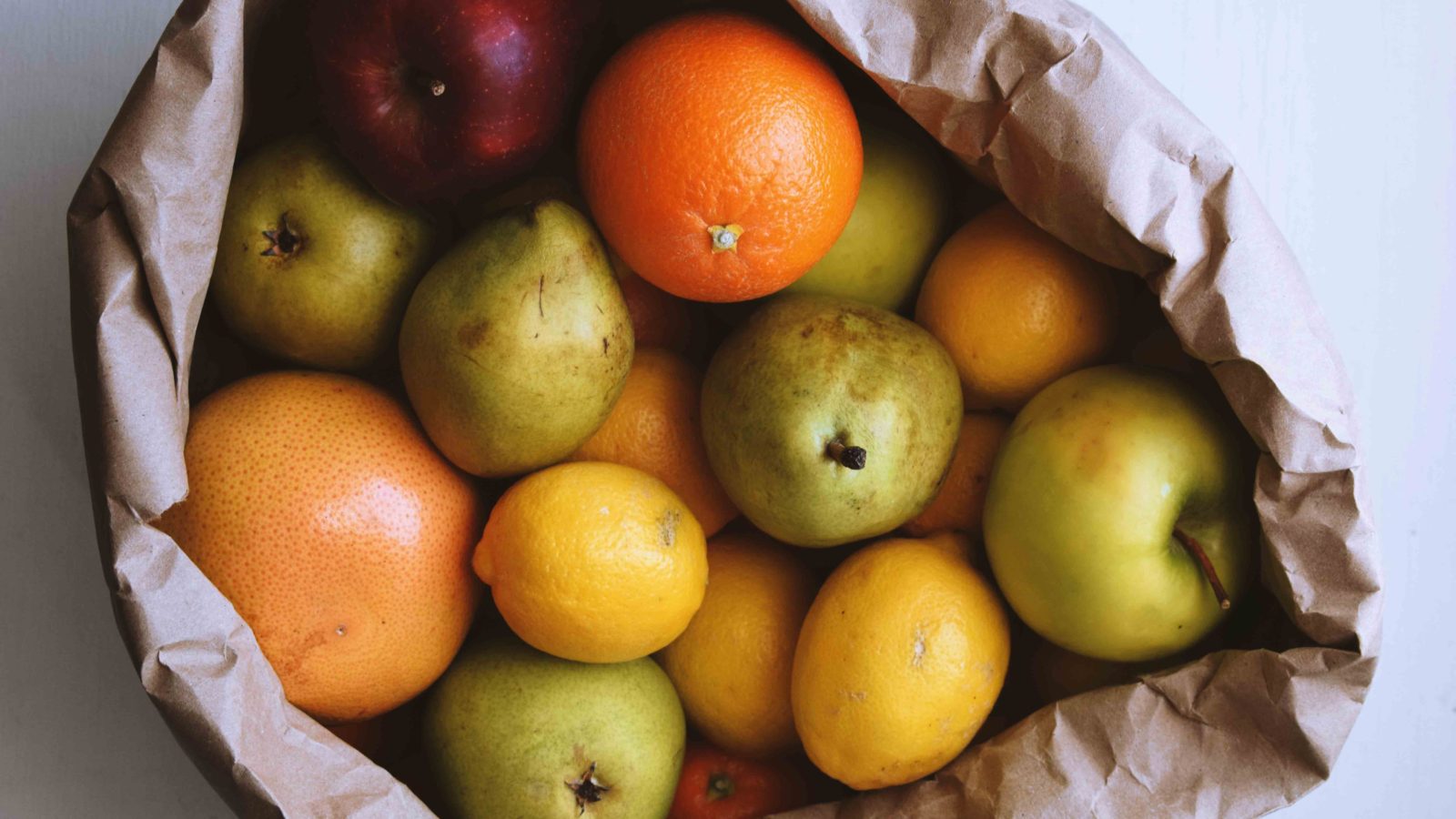 Living in London, it’s hard not to notice the onslaught of new instant grocery delivery companies fighting for a slice of your grocery budget. Backed by major OOH advertising and direct marketing campaigns, on-demand grocery brands such as Gorrilas, Weezy, Getir, Zapp and more are competing to acquire new loyal customers in the on-demand retail space. These relatively new companies promise to deliver small orders of groceries in as little as 10 minutes, via hyper-local warehouse hubs, from which bike and moped riders pick, pack and bring your order to you. They’re fighting for a share of the £205bn UK grocery market, banking on the ever-increasing numbers of Brits who are happy to buy their food online. Even in 2019, before the coronavirus pandemic pushed many to try online grocery for the first time, 30% of Brits were shopping for their groceries online at least some of the time, double the 15% doing so a decade before.

The new instant grocery brands are betting on the “need for now”; a consumer dynamic where there are increasing expectations of super-fast delivery, and the normalisation of the idea that when I want something, I can get it right now. The rise and rise of Amazon Prime is a key factor in this. People are increasingly used to being able to pay a premium for the convenience of not having to go out, but still getting their stuff just as quickly as before. Bye bye weekly shop, hello getting what I want, the minute I want it.

As this new way of shopping gains traction, a highly promo-led market has sprung up around it, as investors inject money into competing apps in order to win customers early on in the adoption curve. “I'm OBSESSED. I fully bought into the discounts they provide (and continue to offer - £10 off a £20 order?!) and now I'm hooked”, one colleague told me. The deals are almost too good to be true; last week Getir offered £10 off when spending £11, making my Sunday brunch order almost free of charge. There’s no profit margin here; much like the early days of Uber, all the companies are fighting for the largest share of customers to make themselves an attractive investment option, to win customers via enticing deals, hook them in, and make profit in the long run 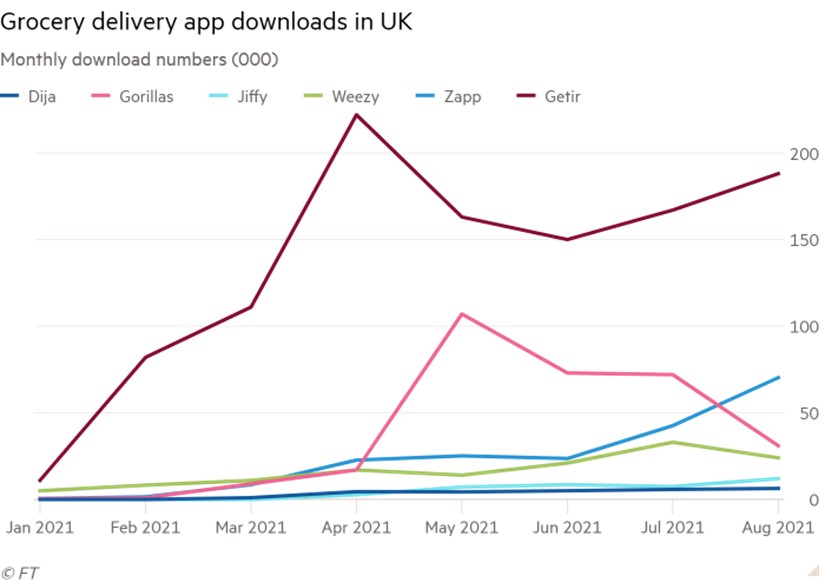 Financial Times analysis shows that app downloads leapt up during the first half of 2021 during lockdown; now we are entering the colder, darker nights, some are recruiting new users again

In such a promotion-led market, developing deep consumer loyalty is going to be challenging. Audiences are downloading multiple apps to chase the best promos, leading to disloyal brand relationships. It’s OK for now, as investors continue to put money into the industry as it booms, but brands need to be thinking long-term about their distinctiveness and differentiation against the rest of the pack in order to build customer loyalty and survive long-term. With a similar product offer, developing a strong brand identity through distinctive assets like colours, logos, and tone of voice is key to get right at this stage to grow share of mind as the market matures, and lock in a loyal customer base. With so many brands competing in the on-demand grocery space, keeping on top of consumer needs and growing trends, negotiating exclusive brand deals and attractive product bundling could also be ways to carve out a niche in a crowded market. Outside of brand, they also need to have exceptional user experience so that customers’ journey through the app is smooth, easy and quick.

Existing market players, meanwhile, are having to defend their ground against the new kids on the block. Deliveroo and Uber Eats have been offering grocery delivery for some time via partnering with various supermarket chains; in these partnerships, supermarket staff pick and pack the orders, and riders pick them up and deliver them as they would with a takeaway delivery. But they are not currently competing quite as aggressively on price, with a notable lack of offers vs. the instant grocery apps.

Another battleground is choice of products: because instant grocery relies on small ‘micro-fulfillment centres’, it offers a limited range – though arguably improving over time. In some ways this simplifies ordering: if I want to buy a pack of sausages, there’s just one type available on Getir right now; but it’s limiting for those with dietary needs and preferences – there aren’t any veggie sausages at all. Recently, Tesco announced their partnership with Gorillas in a move that hopes to combine the speed of Gorillas’ infrastructure with the range, and household name, that Tesco can offer; yet another competitive move in the race for your food shop.

In the rush to get you your groceries, faster and cheaper than ever before, what does this mean for ethics? Uber, another investor-funded start-up disrupting a long-standing industry, has made consumers much wiser to rider rights and working conditions; one colleague I spoke to said “I don't get how it can work and still ensure good working conditions”. They might be right to be worried: earlier this year Sifted investigated reports of worrying working conditions and culture at Gorillas in Berlin. Consumers are much hotter on this than they ever used to be; a bad PR story could be a blow in the battle to be the market leader.

In the light of Cop26, environmental concerns are also high on consumers’ radars. “The carbon footprint of any individual item must be massive”, said another colleague, as multiple instant deliveries through the week might start to replace the traditional weekly shop. The start-ups might argue that their transport is green (with e-bikes and e-scooters commonly used), or that groceries-to-order saves on food waste: but again it’s murky ground, and needs to be interrogated more thoroughly and made transparent to consumers.

The final challenge for the apps to overcome is a more cultural one; some are simply not comfortable with the idea that our culture is moving to a more instant, have-it-now mentality. “Something about it doesn't resonate -I just feel it leads to a lazy culture where you don't ever plan or need to be organised, you just feel like something, hit the button and it arrives”.

For instant grocery companies, although it is key to acquire customers as the market is in its growth phase, they need to be thinking long-term too. As the investor funding slows, it will no longer be possible to rely on loss-leading promos to entice people in: the proposition needs to stand on its own without the mega promotions, and the brand needs to stand for something clear and memorable to customers to be the one they reach for when there’s no deals to be found. Only by doing this will they be able to turn one-time triallists into regular, loyal customers.

Meanwhile, the major supermarkets need to respond to the changing consumer expectations being reset by these new players: groceries delivered faster than if I go out to buy them myself. Competing on this playing field will be tough, but moves like Tesco partnering with Gorillas could be a smart way to dip their toe in without being too exposed to risk of huge investment in their own service. If they can’t compete on instantaneity, they need to push in other areas where the apps might fall down: choice, range, the ability to self-select and ethical excellence.