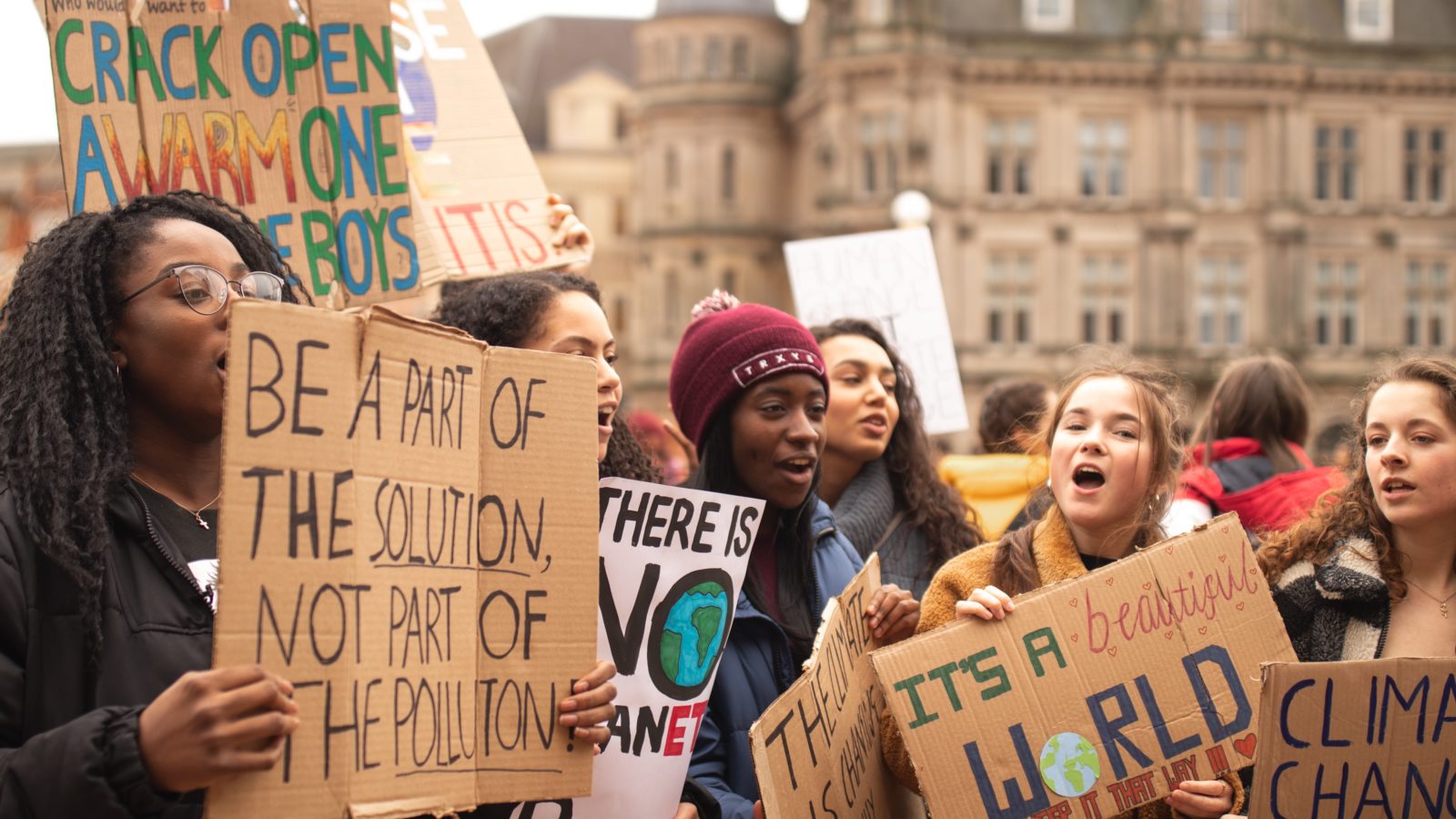 As a young person who will still be alive to see the full impact of climate change, it's distressing to even think about it. I consider myself a climate activist – I’ve made lifestyle changes, I’ve attended protests and I do my research – but I turned off my attention when it came to Cop26 because it made me more anxious.

Before Cop26 began, it was hailed a "turning point for the world". Boris Johnson said it was time to grow up and take responsibility - there was an air of optimism, though tainted with anxiety about our future. Since then, Cop26 has been criticised for not going far enough to meet the 1.5 degree of warming target – the current plan taking us to 2.4 degrees of warming. Failing to end fossil fuel subsidies, phase out coal, put a price on carbon, protect vulnerable communities and deliver a $100bn climate finance commitment. We’ve done more damage to the planet since understanding the consequences than before and I, like many young people across the globe, am frustrated at the seeming lack of urgency.

Eco-anxiety, the chronic fear of environmental doom, is on the rise in the UK and across the globe. A recent international survey of climate anxiety in young people showed that the psychological burdens of the climate crisis were profoundly affecting huge numbers of people around the world, with Governments seen as failing to respond and leaving young people feeling like they have no future. There is a lack of clarity, responsibility, and inclusivity – without which, halting climate change feels impossible. And these concerns are only amplified in the aftermath of Cop26.

Carbon emissions are the primary driver of global climate change and it’s widely recognised that the world needs to urgently reduce emissions. However, there are so many ways we’re able to measure and report this and therefore we lack clarity on the true extent of carbon emissions and climate change. For example, there are several things that produce carbon, which are not covered by carbon emission data by countries, or by countries’ national carbon targets. These include carbon emitted by international aviation and imported products.

At present, the carbon associated with imported goods is linked to the manufacturing country. For example, how many times have you picked up a product that was “made in China” or “made in India”? In other words, despite owning that product in the UK, and creating a demand for it, the emissions are only counted by the country of its production - an invisible carbon footprint coming from goods made overseas. This adds important context to the (growing) emissions of developing nations pursuing economic growth and manufacturing many goods sold around the world.

In the UK, half of our true carbon footprint is created abroad – undermining efforts to cut carbon emissions. This further context when looking at climate change, and the data relating to it, is an important consideration in the responsibility debate, where the true extent of responsibility in countries like the UK is unclear. What is reported is likely only the tip of the iceberg.

So how should responsibility for climate change and reducing carbon emissions be shared between regions, countries, and individuals? Should we look at annual emissions by country? Emissions per person? Historical contributions? Is this adjusted for trade? The variables available to us are a can of worms; how we choose to measure and display it can have a huge impact on the message we take away about who is responsible and what for.

Much of the debate around taking responsibility for climate change is largely based on who is currently emitting the most carbon, with lots of focus placed on China. Whilst it’s true that China is one of the top carbon emitters, we fail to recognise the role of history, economy, and population size. This context matters because the cumulative amount of carbon emitted since the industrial revolution is tied to the warming that has already happened. The timing of CO2 being emitted has little impact on the damage caused.

Being a quantitative researcher, the way we understand this data and the implications this has is interesting to me. In the run up to Cop26 I saw the below graphs showing carbon emissions per capita. The first shows increased carbon emissions per capita over time, with China increasing far beyond other countries. The second shows the same data, but the cumulative weight of carbon emitted into the atmosphere per capita; demonstrating the damage caused by Western nations such as the US and Australia. 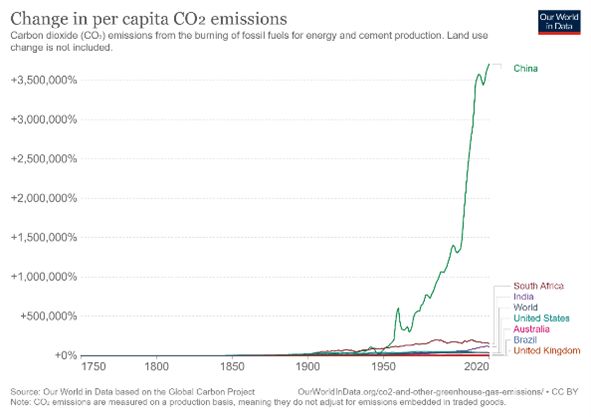 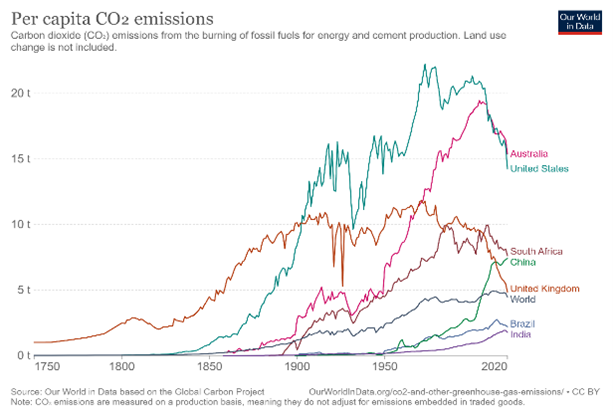 With the long-term damage caused by carbon emissions, it’s important for countries to fully accept responsibility for damage and approach the climate crisis as a global team, as opposed to playing the blame game.

Lastly, Cop26 was criticised for being the “most exclusionary” climate summit ever, with logistical difficulties meaning the exclusion of people with disabilities, civil society groups, and attendees from the Global South; undermining the credibility of the meetings. Mia Mottley, Barbados Prime Minister said, “What must we say to our people, living on the front line…regrettably some of the faces needed at Glasgow, are not present”.

Climate change, like many global crises, further exposes inequalities, with different groups being exposed to vulnerability at varying levels – droughts, flooding, extreme weather events, which are certainly set to increase with global warming. Failure to consider the distribution of these effects can lead to more inequality, as well as social unrest and conflict. As we are already seeing, people will not simply accept these climate disasters and in many places, they are becoming climate refugees. It is therefore crucial for planned action to adapt to specific needs of different groups.

Inclusive climate action addresses an increasing burden on under-represented or excluded social groups, who often suffer most because of climate change. Inclusive climate action means both reducing the effects of climate change on the most vulnerable and ensuring the benefits and burdens of climate action are equitably shared. This requires wider engagement of a range of stakeholders to design the approach towards climate actions, ensuring fairness, accessibility, and equitably distributed impact. With the exclusion of these groups during Cop26, key voices in the discussions are left behind, further entrenching power imbalances and inequality into the climate crisis.

All in all, anxieties about lack of climate action are bound to become worse as we continue to race ahead of 1.5 degrees warming, without a comprehensive plan in place that covers all the data and context of climate change, and its varying impact on countries and the people within them. With disaster around the corner, it’s perhaps time to open the can of worms that is data to truly understand the extent of damage caused, avoid further misinterpretations, and start to act meaningfully on climate change.

Emily Jackson
Share
Next Previous Previous'
Next Insight Next