Can you wait until 2023 to develop your Web3 strategy? 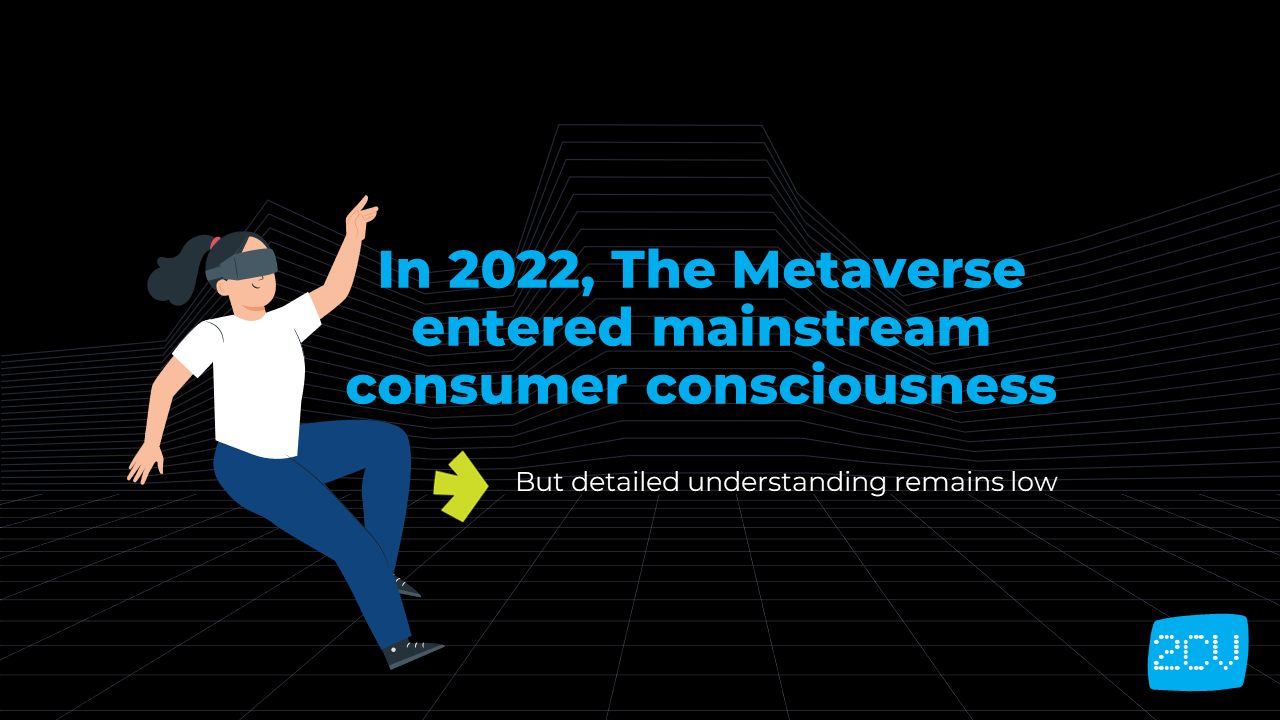 Being prepared for the future is vital to ensuring the long-term relevance and success of any brand.

Is Web3 a short term or long term opportunity for your brand?

Geo-political uncertainty and a constrained economic environment has made 2022 a challenging year for many brands as consumers have tightened their belts and become less loyal to brands. Whilst at the same time, technological innovations such as Web3 and Immersive Technology have made significant progress and are gradually entering mainstream adoption.

In a world of finite resource, how serious should you take this next wave of digital upheaval and your Web3 strategy?

To find out, 2CV’s Jonathan Smetherham attended ‘All That Matters’ to meet and listen to more than 2,000 senior executives from the world of Web3, Music, Sports, Gaming, Digital and Marketing.

In this article, he demystifies some of the jargon around The Metaverse and Web3 and assesses the future potential versus the current reality. He then summarises the key findings from 2CV’s landmark Metaverse study across 8 markets to identify what consumers really want, and uses this to provide initial recommendations on what brands should be doing in this space.

What exactly are The Metaverse and Web3?

The first thing to note is that there is no single consensus among experts about what exactly Web3 or The Metaverse is. There's a lot of jargon, and it can be quite confusing, especially since the terms ’Web3’ and ’The Metaverse’ are often used interchangeably.

A little more precisely, Web3 refers to the underlying information architecture through which users and devices will interact. “The Metaverse” sits on top of this and actually refers to the virtual worlds of the future, in which a full spectrum of simulated experiences will be available to users.

In 2014, Ethereum co-founder Gavin Wood coined the term’Web3’ to describe a decentralised version of the current internet — one that is not dominated by a few huge platforms. Instead, data is stored on a distributed network owned by no one, allowing users to create value on one platform and take it to another without barriers.

On the other hand, the term ‘The Metaverse’ has been prominent in science fiction since Neal Stephenson's 1992 novel Snow Crash. In the story, avatars become proxies for humanity's social standing and wealth, leading some to opt out of the physical world entirely in favour of living in a virtual reality.

In the last 12 months, the term “Metaverse” has slowly begun to enter mainstream consciousness. On 28th October 2021, Mark Zuckerberg announced that Facebook was rebranding to Meta and that he planned to build ‘a Metaverse’. According to the company, this name better ’encompasses’ what it does because it broadens its reach beyond social media to virtual reality.

This presents one of the bigger challenges when conducting research on consumer attitudes toward “The Metaverse”: it can be tricky to unpick whether consumers are referring to decentralized virtual worlds of the future, or specifically to the version that Meta are building (e.g. Horizon Worlds).

What is this vision of the future?

Currently, people have two lives: in one they live in real time, and in the other they live through social media platforms. Web3 offers new ways for people to connect with each other, whether as businesses, workers, or individuals. It opens up the possibility of designing virtual worlds that connect people worldwide to a shared and immersive digital platform, blurring the line between the virtual and physical worlds.

People can have a whole existence in these virtual environments. Many proponents of Web3, such as Dr. Mark Van Rijmenan, suggest that there will be new economies built on the imagination and creative work of designers and artists. Artificial intelligence, machine learning, the ‘Internet of Things’, 6G and immersive technologies will enable real-time communication between people and machines. Consumers will become creators; visiting other worlds and participating in virtual music concerts or sporting events. Shoppers will try on physical items in virtual shops and spend as much on digital clothing as they do on physical clothing.

In short, Web3 will enable us to create all kinds of immersive experiences that transcend the real. The virtual worlds of the future will be limited only by our imagination. Although the physical and digital worlds are converging, Web3 will only really arrive when we stop distinguishing between the virtual and physical worlds and see them as one.

Right now, is The Metaverse anything more than a hype machine?

As someone with a vivid imagination, the possibilities offered by Web3 and some of the work that is already underway, are truly fascinating. Moreover, there is no shortage of savvy marketers with futuristic AV packages and slick soundtracks promising the world, but not always having anything substantial to show for it.

While it’s true that the technology and infrastructure are evolving rapidly, they are still far from being deployed on a large scale. Delivering hyper-realistic, live-streamed, volumetric data from 100,000 avatars in different locations around the world, all interacting simultaneously, presents bandwidth, latency, computing power and architectural challenges on an unprecedented scale. The user experience (UX) of existing Web3 deployments require a high level of technical understanding at best, and can be shockingly poor at worst. Trust in decentralised wallets is also low outside a hardcore group of crypto-natives which has been further undermined by recent crashes in the value of cryptocurrencies and trading volumes of NFTs.

However, critically, the actual take-up of anything that can be described as a 'Metaverse' is very low. Companies that describe themselves as Metaverses, such as Decentraland (which has an advantage due to its first mover status), report low monthly active users compared to their gaming counterparts.

At this stage, it is fair to say that some of the hype is just hype. But some of it is real and, the small part that is real, could well be enough to change pretty much everything we do digitally as soon as Web3 offers as much convenience and as seamless an experience as Web2.

What do consumers want?

In September 2022, 2CV surveyed more than 4,000 consumers across 8 markets to try and unpick what consumers ACTUALLY want from the Metaverse.

We found that although The Metaverse has now entered mainstream consciousness globally (with 72% aware of the term), less than half are familiar with it (41%).

However, there are some interesting regional differences with East Asian consumers being more optimistic and more likely to consider ’The Metaverse’ as ‘The Future’. This is compared to British and American consumers who are more likely to be sceptical and see it as “Just a Fad”.

The scenarios that are most appealing to consumers are immersive experiences in tourism, shopping and entertainment while dating. Whereas business and sports activities are of least interest. There are some fascinating differences between countries though and a lot more to unpick.

You can find out more by downloading our research here. 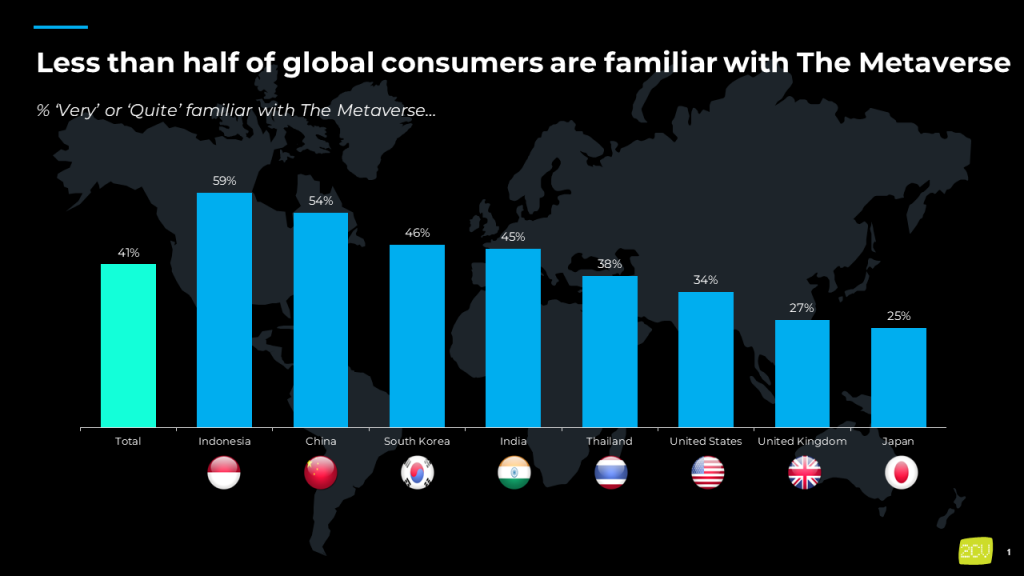 What should you be doing?

Unfortunately, some of the skills and capabilities required for marketing on the immersive internet are different from those used in traditional marketing. Building a virtual shop in a virtual world or producing NFT collectibles is more capital and resource intensive than creating a social media campaign. Digitising processes and integrating operational resources is easier said than done. Not only does this require significant upfront investment, but it also requires strong connections with your community, who will be open to experimentation and forgiving of initial trial and error.

Caught between a virtual world of infinite possibilities and a real world of limited resources, I outline my thoughts on what to focus on: 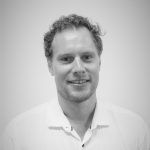